The organisation of the steering committee

SC members:  The steering committee (SC) comprises five members. Their main task is to organise the NN conferences and to support and accompany the network’s development.  Three of these members constitute the ‘core’ of the committee as they are elected  for three years running. Each year, one of these members leaves the committee while a new members joins it. Re-election is possible. Moreover, there are two  ‘peripheral members’ who are directly involved in the organisation of the annual meetings.  One of them has hosted the previous year’s meeting, the other one is there to prepare the following  year’s conference.

The network aims at having a minimum of three different countries represented in the committee but no country should have more than two active SC representatives. In 2009, Thomas Hoffmann, one of the NN founding fathers, was elected as an honorary member of the  SC at the conference in Izmir in 2009.

Finance: Steering Committee meetings are financed by the SC member institutions, if possible through ERASMUS-OM funding. 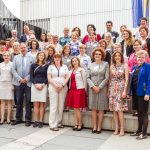